Under the guidance of health offiicals, we have established important procedures for resuming events at the Orpheum Theatre and Halloran Centre. Read all of the details.

Mark and his musical guests take audiences on a journey behind the music, sharing personal stories and introducing exciting new works.

This innovative, immersive experience lifts the veil on Memphis’ longstanding songwriting tradition for music fans of all genres to enjoy.

Host Mark Edgar Stuart was the go-to bass player for an elite group of record producers and artists. As a sideman he has toured with some of Memphis' finest exports, one which led to an appearance on The Late Show with David Letterman.  In 2010, he put down his bass, picked up a guitar and started writing songs. His debut CD, Blues for Lou, earned him “Record Of The Year” by the Memphis Flyer. Since then he has become one of the city's most beloved singer-songwriters, and has enjoyed national recognition in publications such as Garden & Gun, Paste, & Los Angeles Times.

Throughout the summer of 2020, the Memphis Songwriter Series went virtual with a series of mini-concerts. Rewatch now on YouTube! 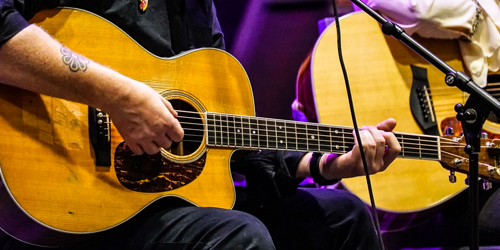